A highlight of this semester for the Kenan Institute’s Kenan Scholars was their recent lunch and learn with UNC Kenan-Flagler Business School Dean Doug Shackelford.

After an introduction from Kenan Scholar Abby Staker, Dean Shackelford gave the students some background about his time as a student at UNC-Chapel Hill as well as his career path.

Shackelford attended UNC Kenan-Flagler Business School as an undergraduate student from 1976 to 1980. Following graduation, he worked as a public accountant for five years before pursuing teaching. He received his doctorate from the University of Michigan before re-joining his alma mater as an assistant professor in 1990.

“I always tell people this is the most incredible job,” Shackelford told the Kenan Scholars. “To be able to represent your alma mater which is such an incredible institution that’s got great students, great faculty, great staff, great alums. It’s a tremendous honor.”

He explained that a large part of his job is acting as a representative for the business school on campus, domestically and abroad.

“I spend less time in Chapel Hill than I do in other places,” he said. “In some sense my job is really kind of to represent all of us outside these buildings.”
He then opened the floor to questions from the scholars. Topics ranged from deciding on a specialization within business to how Kenan-Flagler is poised to become the premier business school of the south as industry within the Research Triangle Park continues to grow.

To find specialization, Shackelford recommended students start conversations with family members and others they know who are involved in business, getting their advice and figuring out what aspects of the field they enjoy. He also suggested participating in the many clubs, internships and extra-curricular activities Kenan-Flagler offers its students.

“There’s massive opportunities to learn outside the classroom,” he said.

Kenan-Flagler’s core values, excellence, leadership, integrity, community and teamwork, play a big part in this learning, he said, and they set the school apart.

Shackelford noted the best assessment of the success of the school is to look at what its alumni are doing to change the world. He shared the stories of a few notable graduates, including one providing micro-loans to boost home ownership in India and another creating a business case to incentivize tree farmers to not poach elephants and rhinos in Northeastern India.

“It is unreal what our alums have done around the world,” Shackelford said.

And he noted that right here at home, the future for business couldn’t be brighter.

“The south has been a cursed land,” he said. “It never had the opportunity to enjoy some of the prosperity of some of the other areas of the country. Our blighted past enables us to have a really bright future.”

He said Virginia, North Carolina, South Carolina and Georgia are growing faster than all the states in the Northeast and Midwest combined.

“We’ve got tons of land, we’ve got tons of great weather, we haven’t been overproduced,” he noted. “If in the next 50 years we realize our potential in this area, the opportunity is unbelievable.”

Shackelford concluded that students at Kenan-Flagler are a part of an elite group.

“We have very high standards to get in,” he said. “If you get in over those standards, you’re a whole and important part of our community. You’re in here for life because when you graduate you’re a part of the alumni community forever.” 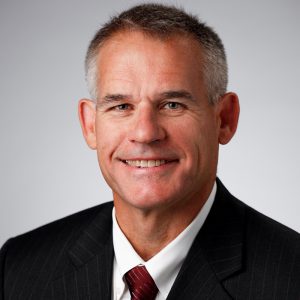 “I always tell people this is the most incredible job. To be able to represent your alma mater which is such an incredible institution that’s got great students, great faculty, great staff, great alums. It’s a tremendous honor.”