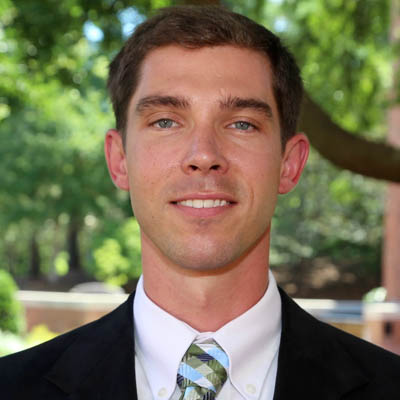 I grew up in the suburbs of Atlanta and as an undergraduate attended the University of Georgia in Athens. While at UGA I played club rugby, worked, and started a family. After graduation, I attended the U.S. Army Officer Candidate School and was commissioned as an All-Source Intelligence officer before being assigned to duty in the Republic of Korea (South Korea). In addition to South Korea, I’ve had to the opportunity to live in Morocco, Kuwait, and spent 12 months deployed in Baghdad, Iraq.

My experience in the Army highlighted the importance of leadership and critical thinking, and attending Kenan-Flagler was a clear choice for further developing these key skills as I transitioned from the military. Because I hope to move into the energy sector, Kenan-Flagler’s energy program and dedication to sustainability in business were also critical to making the school my top choice. The opportunity to work with Professor Arbogast and the Energy Center as a Kenan Scholar presents an amazing opportunity for me to continue to improve key skills while also building an in-depth understanding of the energy sector, which is so influential in world events.

It’s important to me to be involved in the community, and I’m active in a number of different organizations at UNC and in the Chapel Hill area, including the Kenan-Flagler Veteran’s Association, ONE ACT, Carolina Women in Business, MBA Ambassadors, and the Energy Club. In my free time, I enjoy traveling, being outdoors, and doing hands-on work.