Can Entrepreneurs Save the Planet?

Climate change is one of the biggest threats to our planet and our way of life. The UN Intergovernmental Panel on Climate Change recently released its 2022 Climate Report, which features a stern warning that human-induced climate change is already causing irreversible damage to humans and nature alike. There is no doubt that combating climate change will take significant resources, collaboration and ingenuity. 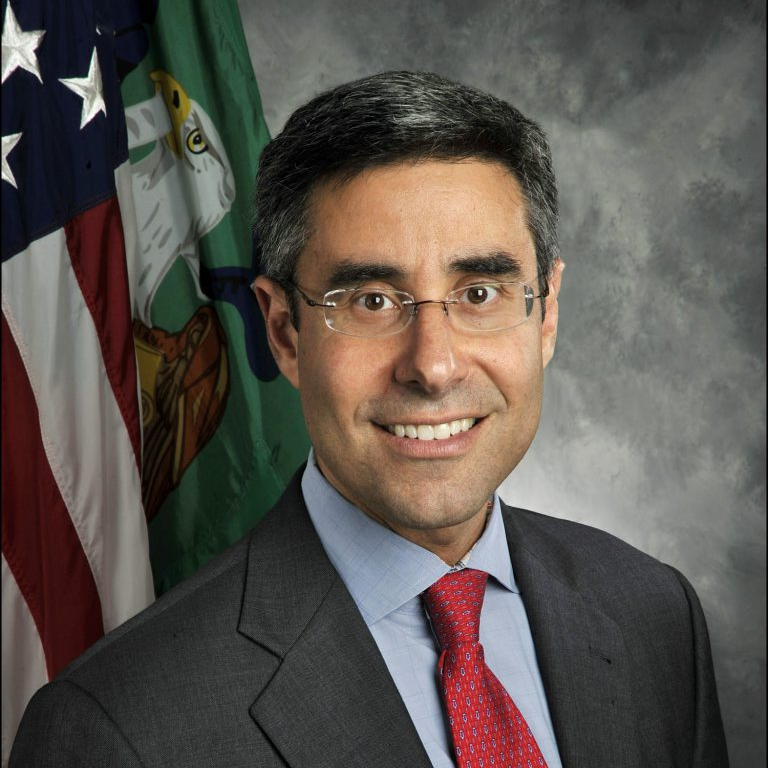 Gerald: Society faces a series of major problems, such as climate change, which require transformational technological change as part of the solution. Many of these problems are so large and complex that it seems unlikely that entrepreneurs working in their garages are going to solve these alone. This raises the question: How do we create the right ecosystem to foster these technological solutions and go from government and university labs to entrepreneurs to large scale production? 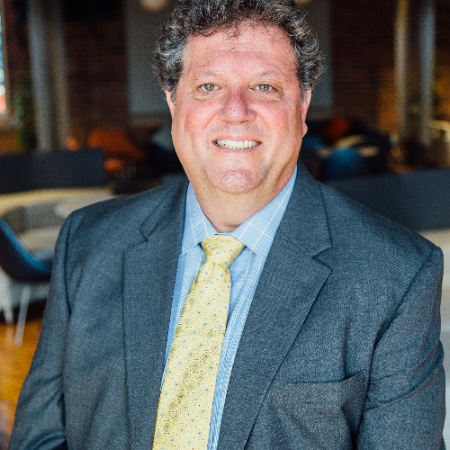 Eric: It is critical to foster the transition of technology from the realm of basic science and into the realm of practical application. Corporations are focused on quarter-over-quarter profits, and something that’s two or three quarters from market is just too far. So there remains, in the middle here, a pretty big gap. How do we fill that gap? Well, one of the ways is with venture capital.

We need effective mechanisms to translate that fundamental research into practical application and implementation. That also means creating new forms of private sector capital along the lines of Breakthrough Energy Ventures – which has a longer investing horizon and a core group of scientists and engineers to evaluate these technologies – that are built to meet the challenges of effective deployment of technology in tough tech spaces. 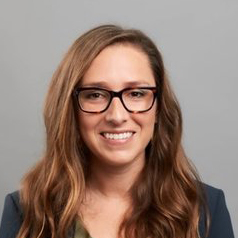 Jacquelyn: The big question is whether or not there is a case for – or against – whether startups can play a role in clean tech development. When looking at some of the characteristics of the energy sector, the case for startups at first looks pretty hopeless when it comes to whether it’s the right form of organization for developing and commercializing clean energy tech. Clean tech is an incredibly capital-intensive industry with some key barriers to entry. So unlike a software company, energy technology firms typically need a lot of upfront financing, which Eric alluded to. Clean tech energy is also a highly regulated industry, so one example of why this is a challenge could be something like how utilities need to recover their investment costs. If they deploy a bunch of renewables, for instance, they’re going to possibly need to raise the price of power they’re charging customers in order to recover those costs. And then the rate has to go through a big regulatory process.

Additionally, the social value of clean energy is higher than the private value. For example, the price you pay for gasoline at the pump does not reflect all the costs associated with using that gasoline because of the negative effects it creates for society through pollution. This price differential dampens the incentive to innovate. Finally, what I think is most important for the startup context is that there are very long time horizons. Eric mentioned that it’s a scaling up challenge, and that’s exactly right. And these very long time horizons make clean tech not the right setting for venture capitalists, per se. If we a look at the trends in clean tech startups over the past 20 years or so, things start to look even more futile.

So, should startups just give up? I’m going to try to argue that there is a pretty strong case for startups in the clean tech space. Let’s start by looking at how the costs of electricity from renewable energy have actually dropped substantially over the last 10 years or so. And a different story starts to emerge.

This chart below  is the cost of electricity from different sources from 2010 (in blue) to 2017. It illustrates that many of the prices of clean energy have fallen substantially, so much so that they now can compete with dirty sources. Clearly, something worked. The costs of these technologies are coming down, which usually happens by a lot of deployments of that technology and learning by doing. Despite the fact that there is this commonly held view that renewables are more expensive, that’s just simply not the case in a lot of different contexts.

Cost of Electricity from Selected Sources 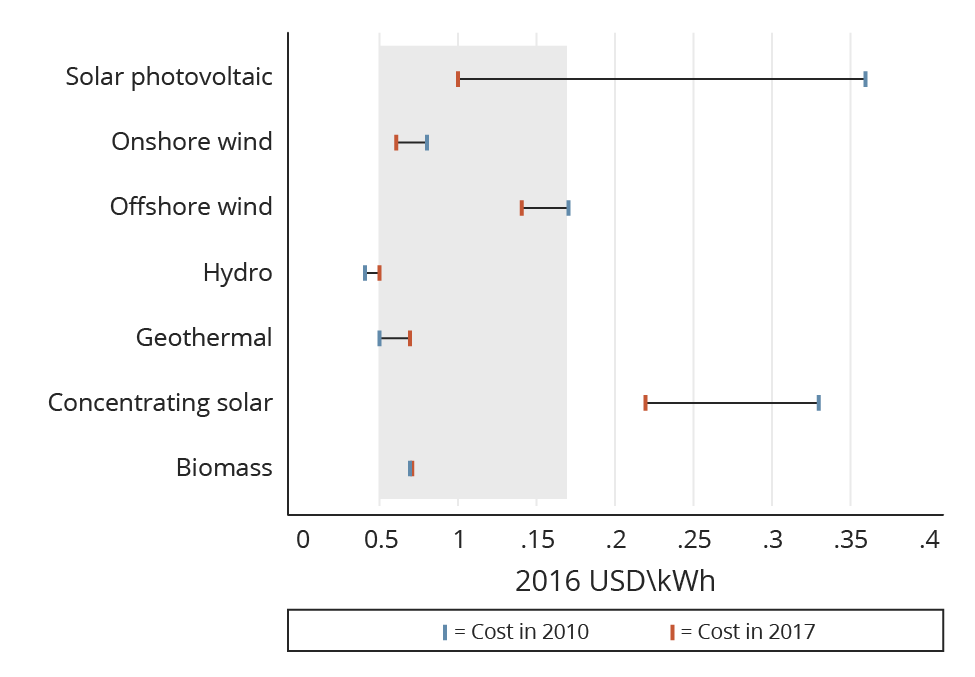 The challenge, though, is that we had substantial amounts of innovation. We just don’t know exactly what it is that drove it. There were so many different types of investments, subsidies and other factors that could be contributing to this cost decline. And it’s likely a mix of different things.

Finally, there’s another big economy-wide shift that’s happening that is signaling that there will be an increase in demand for clean energy innovation. Institutional investors are increasingly using ESG (environmental, social and governance) metrics on companies, requiring long-term commitments to socially responsible investments. It’s not just for reputation – it’s because investors recognize the very real risks of climate change. There’s been a huge amount of money that’s being allocated to ESG over the last two or three years, with some of it focusing on companies that are working toward reducing emissions. But these measures are…usually really inconsistent. They’re based on tons of data, but aggregated up or weighted in different ways. And so we really just need more detailed and standardized data to be able to provide more nuanced insights that could help inform investment decision-making.1 However, when it comes to clean tech innovation, I would say it’s more about an economy-wide shift this time around, rather than it being just a hot sector.

Gerald: You both pointed to this issue of needing patient capital, or in the case of clean tech, ultra-patient capital. So what is the balance between patient capital and oversight? How do you get the right balance?

Eric: Well, I would say the first thing you want to do is be clear about what you mean by the word patient. And I definitely need to be clear that the term patient doesn’t imply any lack of urgency – it’s incredibly urgent, but just takes a very long time when you are building physical things at scale. So it’s a recognition of the fact that it’s going to take a long time. And I think that oversight is absolutely critical. For us, oversight comes in the form of carefully thought out, and mutually agreed upon, quantitative milestones and metrics that people need to meet by certain times to convince everyone that the technology is continuing to move toward market. Very rigorous, thoughtful and informed oversight is necessary – while [also] recognizing that this is going to take a long time to get to deployment.

Jacquelyn: I agree with Eric, and I also want to continue clarifying terminology on oversight. This could even just be a matter of making sure that you’re gathering the right information about what is happening. What are the efforts that are being made? What are the management practices and the outcomes? But there’s certainly a balance, especially with startups that don’t necessarily have tons of people with time to be reporting on a lot of different things all the time, and also where there might be a little bit more room for being particularly nimble. There is a lot of opportunity for research in this space, in terms of trying to figure out how often we should be checking in or how should we direct their activities. And so I just think that there is a lot of room to learn more about what type of oversight leads to better outcomes.

Gerald: From your research, what can you tell us about what makes good entrepreneurs tick, especially in the clean tech space?

Eric: My mulish obstinacy is the first thing that comes to mind. You have to be absolutely single-mindedly focused on the problem at hand. I don’t think there’s a one-size-fits-all. We have seen successful entrepreneurs that come in every shape and size, from every corner, from every little rock that we look under. We find interesting people with interesting stories and interesting technologies, especially in clean tech, where the technical expertise that’s required is deep. I would say it is rare to find all the attributes that we need in a single person. And so, rather, it’s important to form effective teams. We spend a lot of our time building those teams. One activity that we’ve found to be especially useful is if we have an area that we’re very interested in working in but we can’t find a company in that space that that we like, then we build a team from the ground up. But it’s an added layer of difficulty beyond some of the activities in tech because the technical acumen or the requirements for technical acumen are so deep. We often find that teams are the way to go.

Jacquelyn: I definitely agree with that. The technical knowledge required here is so extensive, and being able to communicate that is really important. Additionally, the regulatory components here require somebody with a good understanding of the regulations. You really just need a diverse set of skills and expertise. And then just to hit home, every entrepreneur needs to be singularly focused on what they’re doing. This may sound a little bit extreme, but I think it’s even more important in this space. They really need to see climate change as an existential crisis [in order] to be extremely resilient. Given these time horizons, be ready to wait more than 10 years. This really requires much more passion, resilience and patience of the founders as well as the capital. Clean energy entrepreneurs really believe that the world as we know it is will simply no longer going to exist if we don’t solve this. So, the decision kind of is a no-brainer.

Stay up to date on this and other facets of the Kenan Institute’s exploration of stakeholder capitalism + ESG investing.

1 For more on this, please see ESG Measurement: A Surprisingly Complex Issue 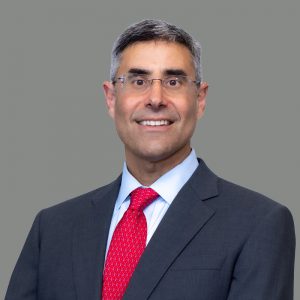