Short-term Help for Long-term Prosperity: Staving Off a Second-Wave Downturn

Americans of all political persuasions have surely seen enough electoral map projections on their TV screens to last awhile. But they shouldn’t hold their collective breath for a return to regular programming any time soon, given the explosion of COVID-19 cases across the U.S., Europe and beyond. Now that results of the hard-fought U.S. presidential election are in, it’s time to examine the near-term implications of the election’s outcome for the U.S. economy in the face of a virulent second (and in some cases, third) wave of the pandemic. While there were sharp philosophical differences between President-elect Joe Biden and President Trump regarding regulation, taxation, trade, healthcare reform and environmental policy, the medium-run priorities of the eventual winner will be subject to significant legislative uncertainty — and are unlikely to come into effect until mid-2021 at the earliest. Instead, we focus on the outlook for the U.S. economy through the next few potentially harrowing months. 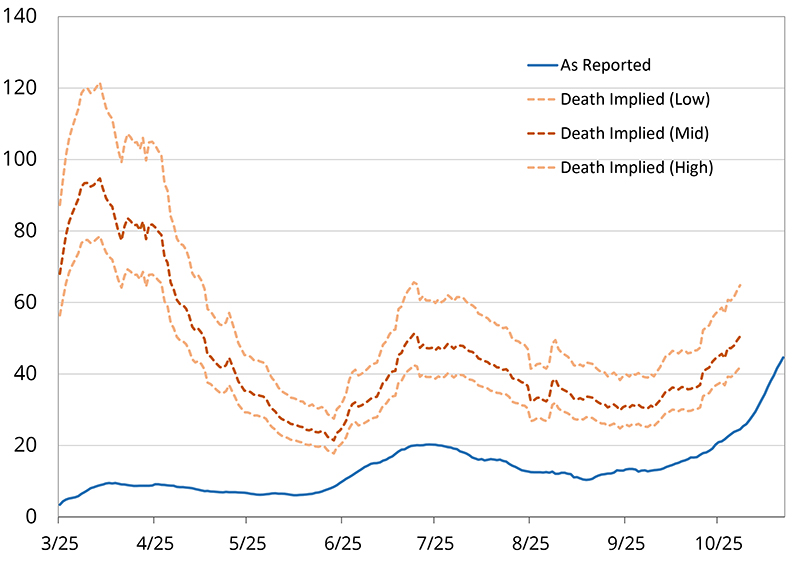 A natural question is whether the outcome of the election really has any consequence at all for the economy in the short term. There may, of course, be some movement in general consumption patterns in reaction to the volatility of the times — but in which direction remains to be seen. Further, one might hope that the resolution of electoral uncertainty encourages risk-taking via pent-up capital investment among U.S. corporates. Financial markets, which are inherently forward-looking, might be read as approving of the near-term outlook.

Yet we’re skeptical of this positive signal, given the trajectory of COVID-19 across the U.S. and Europe. First, the simple resolution of electoral uncertainty likely creates a tailwind for risky assets, so it may be just a more certain (rather than a better) outlook helping stocks. Second, the lack of a Democratic “blue wave” and a divided Congress is likely good only for longer term business prospects (e.g., less regulation and tax). Third, there presumably will be stock market winners and losers to keep an eye on, so it’s hard to draw inferences about broad economic prospects over the next few months. We saw this on November 9 with the positive vaccine news and the reversal of gains in many of the hottest “COVID trades.”

We would hope, after a long stretch of vicious rhetoric, that the post-election political temperature cools down and allows the country to refocus on the healthcare crisis and, where feasible, get back to the business of business. Unfortunately, as COVID-19 rips through the industrialized world once again, the sober reality is that we will likely see the following impacts:

(1) Non-essential economic activity will be increasingly restrained (e.g., holiday shopping and travel). In recent weeks, many states have had to roll back their reopening plans, including restrictions on the number of people allowed to gather and capacity limits for nonessential businesses. As we head into the holiday season, families are being discouraged from getting together as they would in a typical year, with even the CDC issuing recommendations to host holiday meals virtually.1

(2) Small businesses will continue to struggle and we may witness further closures and bankruptcies. It is difficult to know how many small businesses have permanently closed since the pandemic began, since many do not have debt and do not need to file for bankruptcy. However, online business reviewer Yelp reported that 80,000 of their listed companies had permanently shut between March 1 and July 25 — many of them small, local businesses.2 If another round of lockdowns occurs, it could be even more detrimental to small businesses, especially in the absence of renewed government support.

(4) Many American households – which no longer receive some of the augmented unemployment benefits provided earlier in the pandemic — face more financial devastation at significant psychological cost. With additional federal pandemic unemployment compensation having expired in July and many workers now starting to exhaust their state jobless benefits, many families are faced with increased financial stress, leading to housing and food insecurities.4 5 And while our measures of socioeconomic adversity in the U.S. declined over the summer, they appear to be increasing again with the recent spike in COVID-19 cases —especially for those under 40 years of age and for people of color.

As we have seen in many jurisdictions, intelligent, measured experimentation with opening was associated with better economic conditions, but also necessarily engendered an increased number of cases. In a previous work, we argued that a categorical shutdown that completely prioritizes infection minimization is a blunt tool, and that policymakers should instead holistically consider healthcare and economic tradeoffs. Yet we argued that the tradeoff between healthcare and economic objectives should be based on hospitalization capacity, rather than the number of cases in isolation.

Unfortunately, the emerging second wave is associated with a significant increase in hospitalizations across the U.S. warranting careful consideration. We observe this already in several parts of the U.S., where renewed concerns about life and death triage have emerged. If this trend accelerates, policymakers may have no choice but to engage in additional widespread shutdowns (as we’re already seeing in Europe). This choice, while perhaps justified, would engineer a significant double-dip recession, further rounds of layoffs and a massive psychological cost on an already COVID-weary population.

% of U.S. adults who say if a vaccine to prevent COVID-19 were available today, they… 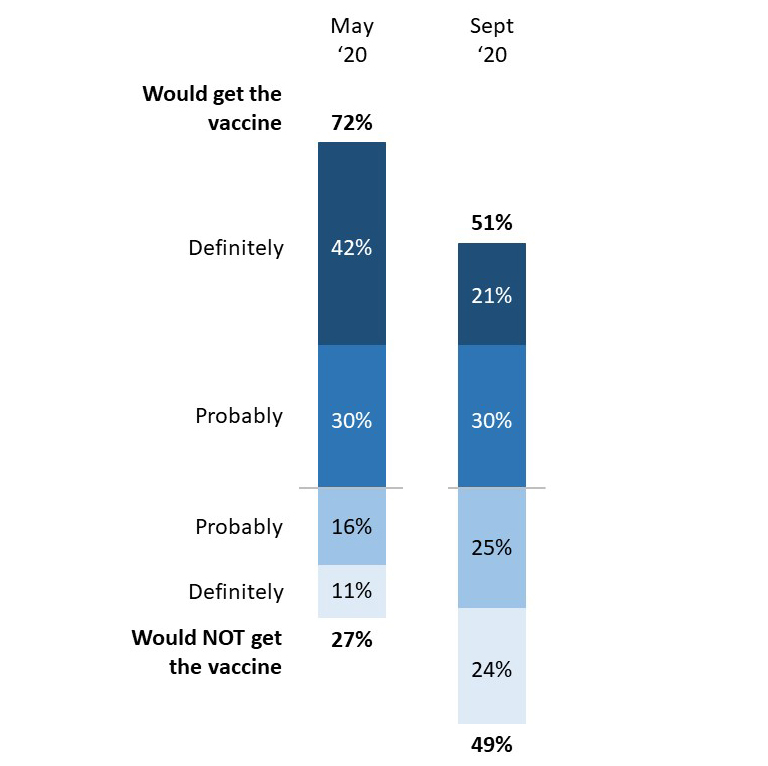 The silver bullet is, as it has always been, an effective vaccine. While substantial progress is being made, we should be honest with ourselves in that the timing of economic benefits is uncertain even with a potential vaccine approval by the end of this year. A vaccine breakthrough is not sufficient in and of itself as an economic panacea. In order for a there to be a significant change in economic activity (imagine a reluctant consumer finally electing to step into a nonessential storefront or taking a seat in a crowded movie theater), a vaccine breakthrough is merely step one of many; massive challenges remain with respect to vaccine distribution and immunization take-up. In addition, there has to be a clear prioritization strategy for a vaccine rollout; the absence of such a strategy could generate confusion and inefficiency that substantially slows down the health and economic benefits. Finally, there must be widespread adoption by a skeptical public. And while we wait for a vaccine, short-term economic progress still hinges on a sense of individual responsibility, as we diligently practice social distancing, wear masks, wash our hands and stay home if we’re feeling unwell — though there is growing evidence of a weary population less and less willing to comply with these precautions.

Given the frustrating plateau in economic recovery that we’ve already witnessed, coupled with the dire consequences of an additional shutdown, it’s critical that Congress exhibit a renewed commitment to additional support. Although legislative negotiations completely fizzled during the heat of the election, there has been some chatter about rekindling talks since the presidential election was called. Were this to wait until after the new Congress is sworn in, the impact of any support would be too late to head off an impending deep economic downturn — set to be felt broadly by many low-wage, psychologically vulnerable American workers. There is no time to waste — Congress must pass an emergency support plan in the next few weeks to stave off another, potentially more catastrophic, economic downturn. While a plan may be needed for only a few months, it’s imperative that it materialize.

2 Ngo, M. (2020, August 11). Small Businesses Are Dying by the Thousands -And No One is Tracking the Carnage. Bloomberg. Retrieved from https://www.bloomberg.com/news/articles/2020-08-11/small-firms-die-quietly-leaving-thousands-of-failures-uncounted