Is Now the Time to Raise Minimum Wage?

As the U.S. economy begins to recover from the COVID-19 pandemic, there has been widespread reporting of ongoing labor shortages, especially in lower-wage industries, such as food service, that were hard hit by the crisis. In a previous Kenan Insight, we pointed to several factors that are potentially contributing to the current labor imbalance, including ongoing public health concerns, caregiving responsibilities and additional unemployment benefits.

Of the many discussions being held in Washington and beyond about potential policy prescriptions, one long-standing debate has returned to the forefront: should the federal government increase the minimum wage, which hasn’t changed in a decade?

Some economists argue that now, more than ever, the federal government should increase the federal minimum wage, believing that higher wages will entice more workers to return. However, others contend that raising the minimum wage could have unintended consequences for workers and businesses, especially small- and medium-sized businesses still reeling from the pandemic.1 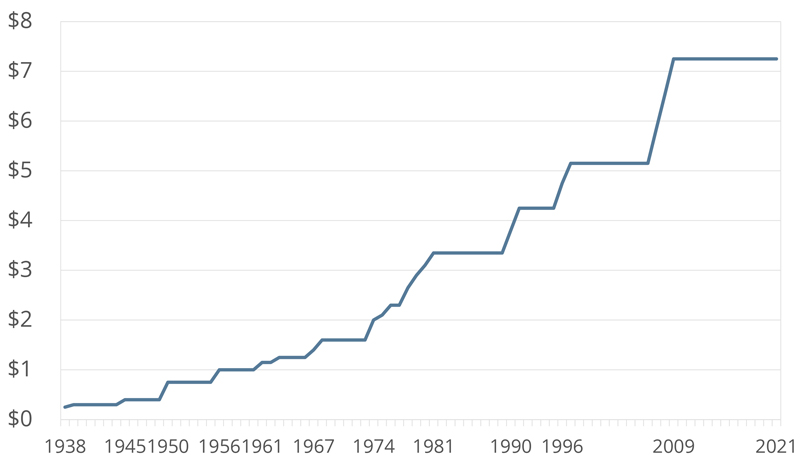 The concept of a minimum wage began in Europe in the mid-19th century, making its way across the Atlantic in the early 20th century.2 U.S. President Franklin D. Roosevelt championed the minimum wage as a way to support laborers who suffered during the Great Depression, ultimately signing the Fair Labor Standards Act of 1938 (FLSA).3 Among other things, the legislation codified a federal minimum wage of $0.25 per hour, with the purpose of creating “a minimum standard of living to protect the health and well-being of employees.”4 However, it did not stipulate an automatic cost-of-living adjustment; rather, it required an act of Congress to make such an adjustment.

This past January, the Raise the Wage Act of 2021 (H.R., 603 S.53) was introduced in both the U.S. House and Senate. The act proposes to increase the minimum wage from $7.25 per hour to $15 per hour by 2025, and institute automatic raises to keep pace with median wages.9 Introduction of this legislation, along with support from the Biden administration, has renewed the national debate about the goals, costs and role of the government in setting a minimum wage.10

From Minimum Wage to Living Wage

Change in Employment in an Average Week 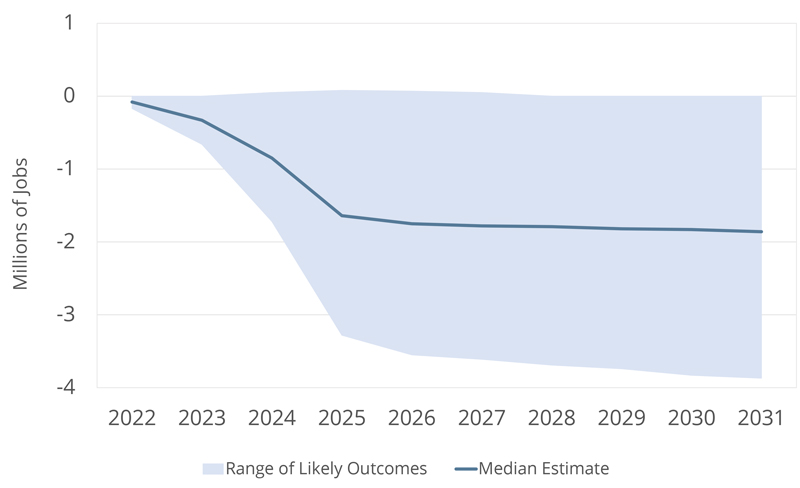 Change in the Number of People in Poverty 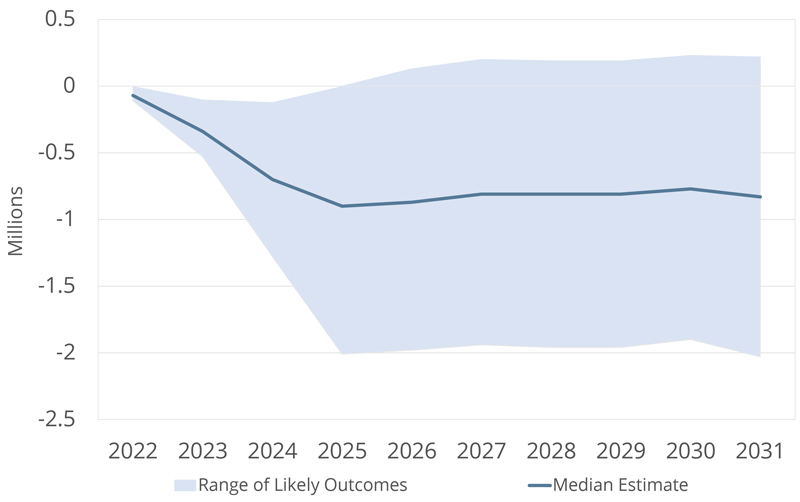 Instituting a minimum wage is a mechanism by which to address poverty. However, as it stands today, the federal minimum wage does not provide many workers with a living wage, defined as the income needed to cover basic essentials such as food, childcare, housing, health insurance and transportation. Estimates of this living wage vary depending on geography (e.g., New York City versus Indianapolis). According to the Living Wage Calculator, a tool developed by researchers at MIT, the living wage in the United States in 2019 was $68,808 per year before taxes for a family of four (two working adults and two children).11 To reach this combined annual income, each adult would have to work 75 hours per week — essentially two full-time jobs — if employed at the current federal minimum wage. A single mother with two children earning the federal minimum wage would need to work 138 hours per week, essentially 24 hours a day for six days.

There is a stark difference between the federal minimum wage and a living wage. As a wealthy country, the United States has the capacity to support poor working Americans. Raising the minimum wage is one policy tool that can be used to help increase the wealth of families and individuals in financial need. The nonpartisan Congressional Budget Office (CBO) estimates that if the Raise the Minimum Wage Act were implemented, 900,000 Americans would be lifted out of poverty by 2025.12,13 It also estimates the act would provide wage increases for 27 million Americans, or 15% of the labor force, and an increase in total payroll of $509 billion over the first 10 years. Additionally, a National Bureau of Economics working paper finds positive effects of an increased minimum wage on incomes for those at the bottom of the income distribution.14

So it seems simple: Raise the minimum wage and help workers out of poverty. Unfortunately, it’s not so straightforward. The challenge is that instituting a minimum wage includes tradeoffs. An across-the-board increase of the federal minimum wage will also come with negative spillovers that may affect some of the most vulnerable Americans. The CBO report also estimates that the proposed increase in the minimum wage could cause 1.4 million Americans to lose their jobs. Although this loss may seem modest compared to the number of people a minimum wage would help, it’s important to account for the intensity of the benefits that accrue to the winners (i.e., those who receive higher wages) and those that accrue to the losers (i.e., those who lose their employment).

Even in the absence of outright job losses, a higher minimum wage can still negatively impact some workers. For example, an increase in the minimum wage can lead to a decrease in the overall hours of low-wage workers, counteracting some of the gains from a higher wage.16 In addition, a higher minimum wage may be passed along to consumers, leading to higher prices for certain goods and services, such as childcare and eldercare.17 From a policy perspective, understanding these tradeoffs is critical to calculating a minimum wage that helps lift people out of poverty while mitigating the negative spillovers.

Ultimately, the federal minimum wage should be increased and keep pace with inflation changes. But given the potential for negative spillovers, policy implementation needs to maximize gains and minimize costs, especially to the most vulnerable Americans. Although the federal minimum wage should be increased from $7.25, the optimal minimum wage should depend on local labor market conditions, cost of living and so on. A flat $15, one-size-fits-all minimum wage applied evenly across the U.S. is potentially bad policy. The impacts and outcomes of an across-the-board approach on a high-wage state such as Connecticut, where the median annual wage is $49,000, will be different than those experienced by a low-wage state such as Mississippi, with a median wage of $30,000 per year. If a $15 minimum wage is right for Connecticut, then it is wrong for Mississippi and vice versa.

Some argue that the federal minimum wage amount should be the floor, and that states or counties should have the authority to set higher rates based on their own market conditions. However, this assumes that the local political process is such that all local markets that should have a higher minimum wage will act accordingly, which is not necessarily the case. Setting a federal minimum wage that takes local markets into consideration will allow for greater equities in wage opportunities across states and counties. Additionally, instituting automated updates to the minimum wage dependent on other market conditions, such as inflation, will ensure these wage consistencies remain over time.

Addressing poverty in America is critically important. With the goal of having all workers earn a living wage, an increase to the minimum wage is just one policy lever Washington can pull. Other measures Congress and the Biden administration have already begun to employ include the child tax credit, which will provide much needed financial support to families, especially for costs like childcare. Additional levers that would support the poor, but are more politically charged, include the negative income tax and universal basic income, which come with their own tradeoffs. As the United States struggles with post-pandemic labor shortages, it is giving workers, especially lower-wage workers who were often on the front lines during the pandemic, the floor to bargain for additional protections. Now policymakers have to decide how they’ll respond.

6 U.S. Department of Labor. History of Changes to the Minimum Wage Law. https://www.dol.gov/agencies/whd/minimum-wage/history

The Long-term Benefits of Short-time Compensation

More Research from Our Experts

The Distribution Of Non-Wage Benefits: Maternity Benefits And Gender Diversity